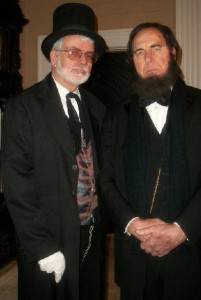 Authentic programs in period attire based on years of research

Unique first person interpretation starting with the meeting of Lamon and Lincoln, through their times on the 8th Judicial Circuit, the Republican National Convention, the train from Springfield, Illinois to the inaugural in Washington, the sneaking of Lincoln through Baltimore, the years of the Lincoln presidency, the Lincoln assassination and the Lincoln funeral train

Places I have done programs as Ward Hill Lamon recently include at the Abraham Lincoln Museum in Springfield, Illinois and at First Night Virginia in Charlottesville, Virginia.

Listen to the Podcast
Podcast Schedule